On February 12, 1969, a 19-year-old Cheryl was discharged from the Huronia Regional Centre after six years of institutionalization. Just 13 days later, on February 25, a social worker and police constable escorted her back. Her social worker recommended readmission after Cheryl disclosed that she had survived multiple accounts of rape.

The files in this exhibit provide insight into how institutional gatekeepers handled sexual assault claims, and claimants. The records show that the people tasked with protecting Cheryl diminished her allegations of sexual assault, and found her at fault for her experiences. Especially troubling, her disclosure served as grounds for readmission, which exposed her further to sexual violence in the institutional setting.

Cheryl's social worker advocated for readmission on the grounds that Cheryl was “presumed [to have been] sexually assaulted by multiple boys.” Cheryl was not in a position to contest her institutionalization because she was certified as incompetent. Certification was based on observations that she had “very poor judgment,” and was in need of supervision.

The social worker’s handwritten notes appended to the involuntary admission record indicate that Cheryl needed protection. While the rape disclosures were the inciting incident that brought in law enforcement, the constable involved reported that Cheryl had previously, “on numerous occasions,” accused others of sexual abuse. According to her social worker’s records: “the whole situation is fuzzy, but all involved have definite feelings that for her own protection, [Cheryl] should return to the Hospital School.”

In these records Cheryl's caretakers granted themselves room to doubt her disclosures, even as protection from sexual violence was the reason for her return to Huronia.

Summary of Cheryl's Readmission to the Ontario Hospital School Orillia 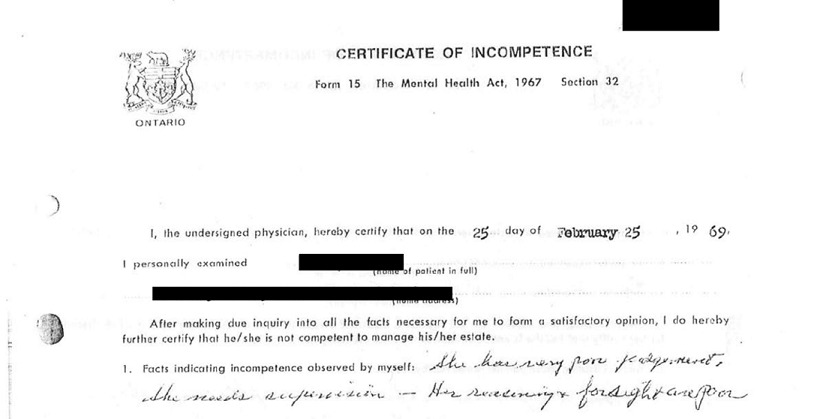 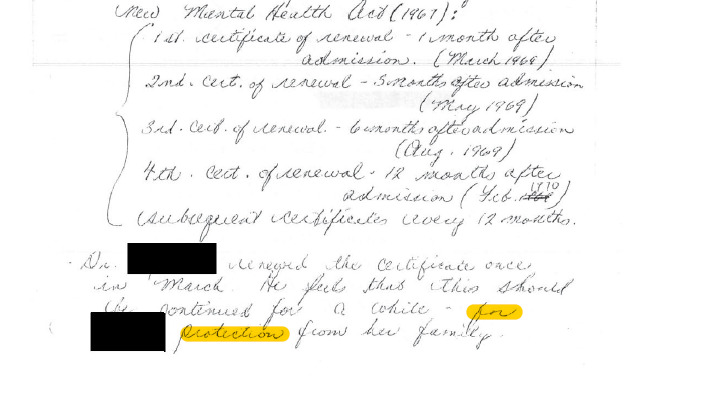 A note about Cheryl's involuntary readmission and relationships 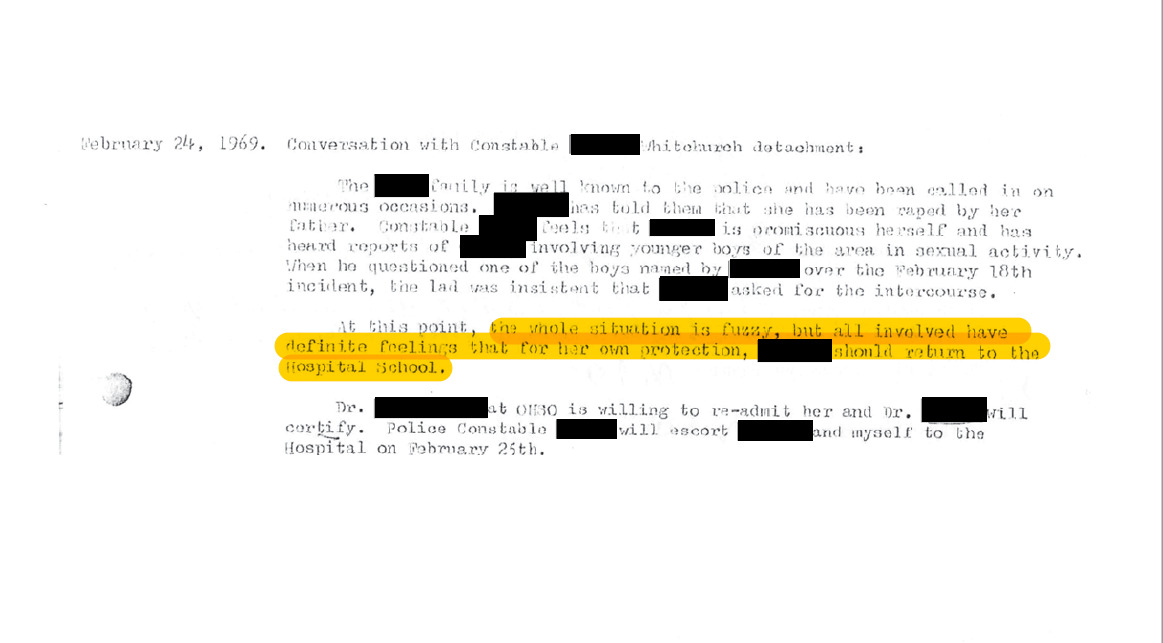 The police constable and social worker responsible for Cheryl's readmission together built a deeply troubling interpretation of her experiences of sexual violence. Not only did the authorities reject Cheryl's claims; they believed she was a willing participant.

In the notes that claimed Cheryl's accounts of abuse were fuzzy, the social worker documented the constable calling Cheryl promiscuous. They also referenced one of Cheryl's accused assailants, who claimed she had “asked for the intercourse.”

This victim-blaming language was reproduced in Cheryl's family history. A standard admission record described her as “well proportioned, good looking.” When describing the accounts of rape that resulted in Cheryl's readmission, her record included the line: “police felt that [Cheryl] was promiscuous and invited sexual activity.” 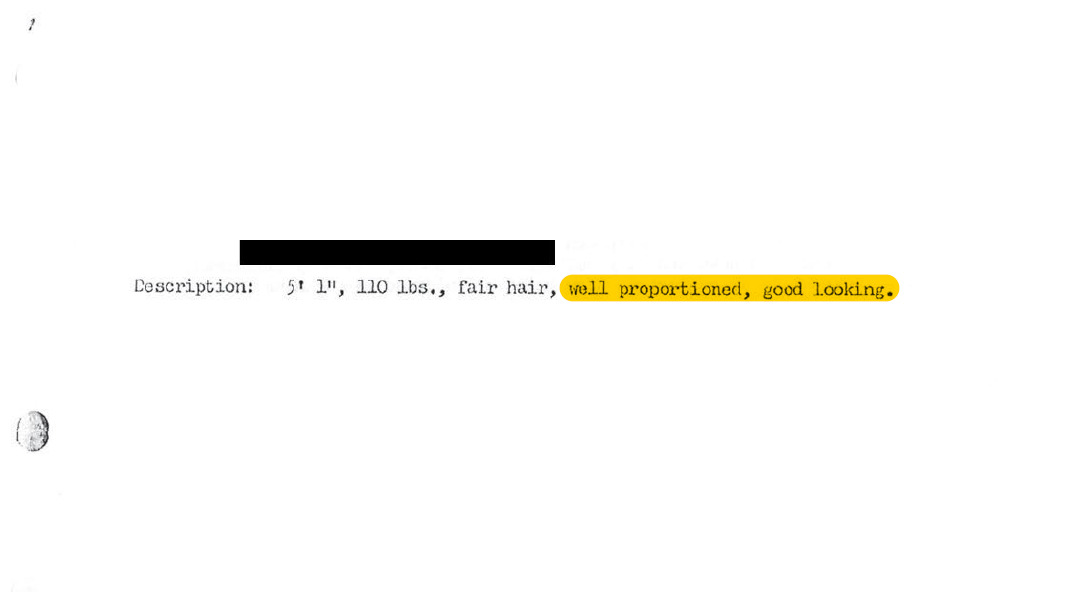 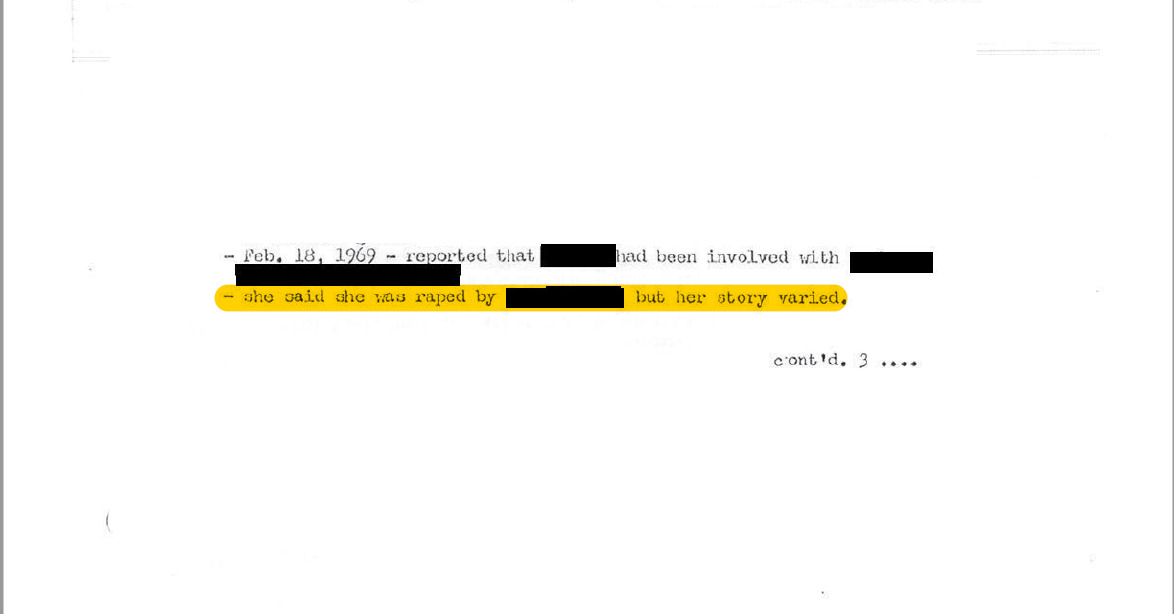 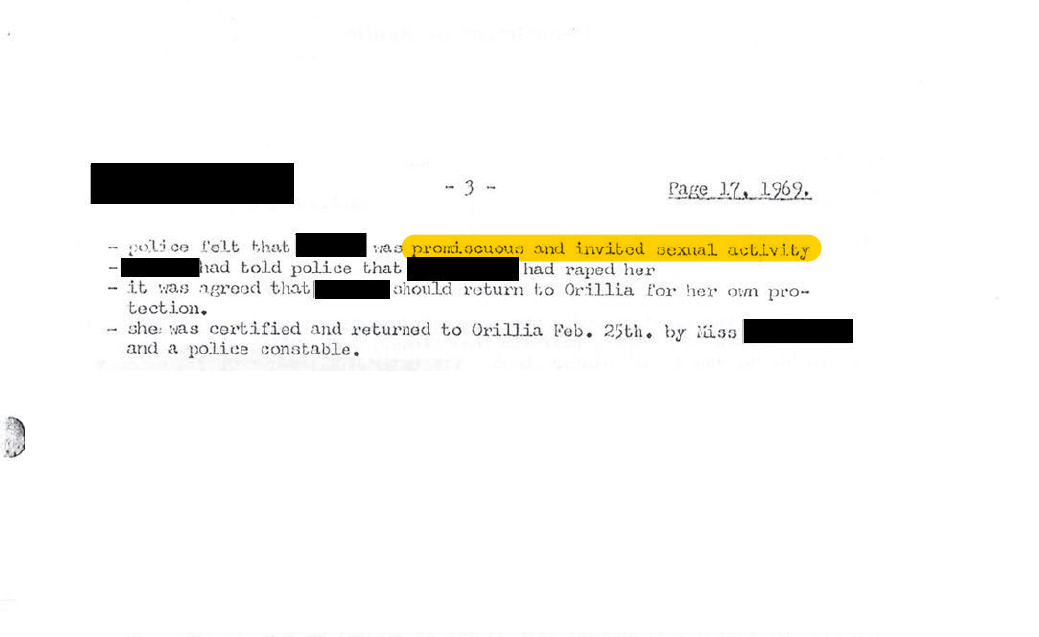 "To Avoid Increasing the Burden on Society"

It is abundantly clear that Huronia was not a refuge from sexual violence. The grounds for Cheryl's readmission even invited new forms of sexual violence. According to her family history file: “At a recent medical conference, it was suggested that [Cheryl] be sterilized—to avoid increasing the burden on society.”

The conference report itself was enclosed in her records. In it, a medical practitioner wrote the following recommendation: “I suggest we consider sterilization before she is permitted to go into the community on her own.” The recommendation is a grossly punitive response to someone who asked for help escaping sexual abuse. Forced sterilization is a violation of a person’s body, sexual autonomy, and reproductive capacity. The act would not protect a victim of sexual abuse, for the primary purpose of forced sterilization is to protect society from more disabled people.

This conference report shared parallels with the infamous words of Justice Oliver Wendell Holmes, who shamefully authored the US Supreme Court decision in Buck v. Bell that upheld the constitutionality of forced sterilization: “three generations of imbeciles are enough.” 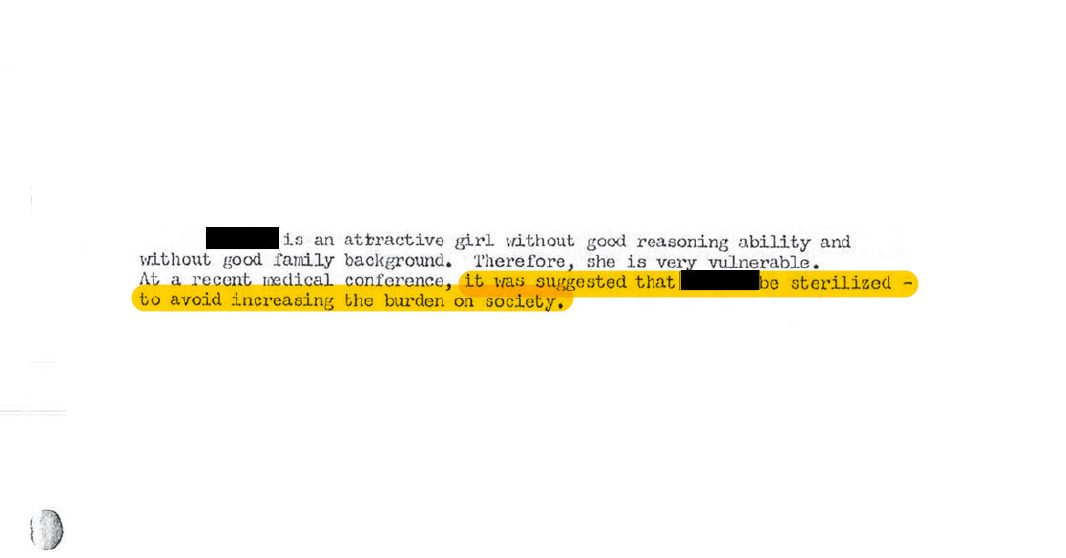 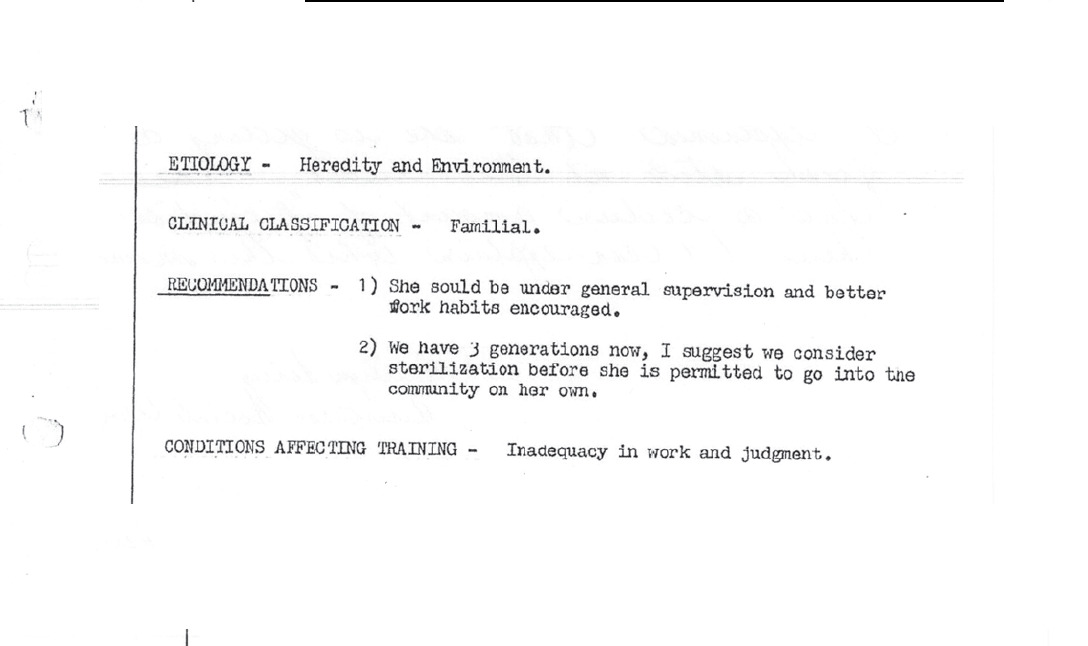 Cheryl was kept at Huronia for a further two years. Four certificates of renewal were signed to renew her status as incompetent. These certificates authorized her continuous, involuntary institutionalization. She remained under institutional control until her discharge on March 21, 1971.

A Collection of Cheryl's Records Regarding this Incident