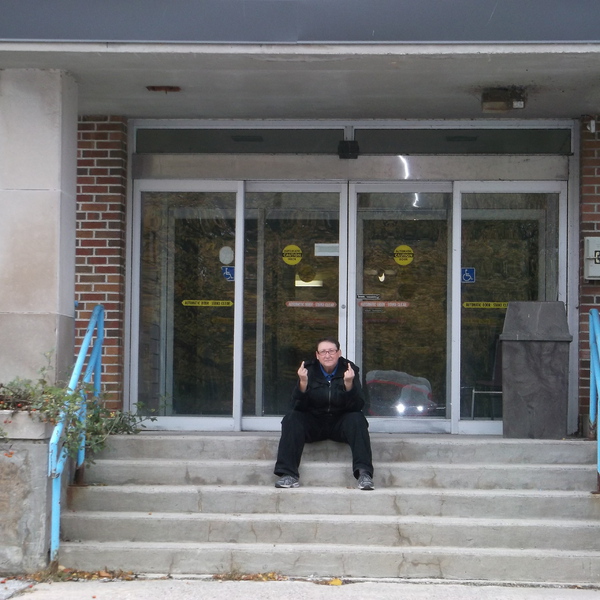 In October of 2014, the Recounting Huronia Collective visited the Huronia site. Survivors, staff, resident families, researchers, and other visitors followed guided tours. The two-day tour concluded with a ceremonial visit to the onsite cemetery. This collection features photographs and recordings from the Recounting Huronia Collective's tour and includes discussions that took place while walking through the buildings, standing on the cemetery grounds, and interacting with security guards.

Audio recordings of discussions between site visitors as they toured the Huronia Regional Centre highlight accounts of abuse and neglect. Survivors also express triumphant stories of running away and helping other residents through the difficult experiences of institutionalization.

Site visitors were able to tour the Huronia Regional Centre in October of 2014. There were security guards positioned on the grounds and inside each building. Security guards also led tours to ensure site visitors followed the rules and stayed where they belonged. Members of the Recounting Huronia Collective received warnings after taking photographs of areas that were not for the public's view, attempting to wear a straight jacket found in the artefact room that had been sewn by a survivor, and not staying with the guided tour.

The Sound Room was equipped with speakers on each wall and in the adjacent rooms so survivors could literally shake the walls of the institution. Installation by Marla Hlady and Christof Migone.

Site visitors touring the grounds along with the Recounting Huronia Research Collective were invited to end the tour by gathering at the cemetery. The deeply emotional weekend was brought to a close with two songs: Libby Roderick's How Could Anyone Ever Tell You That You Were Anything Less Than Beautiful, and Keep On Moving Forward by Emma's Revolution. Browse through the lyrics and hear an audio recording.

A Collection of Recorded Discussions From the Final Visit