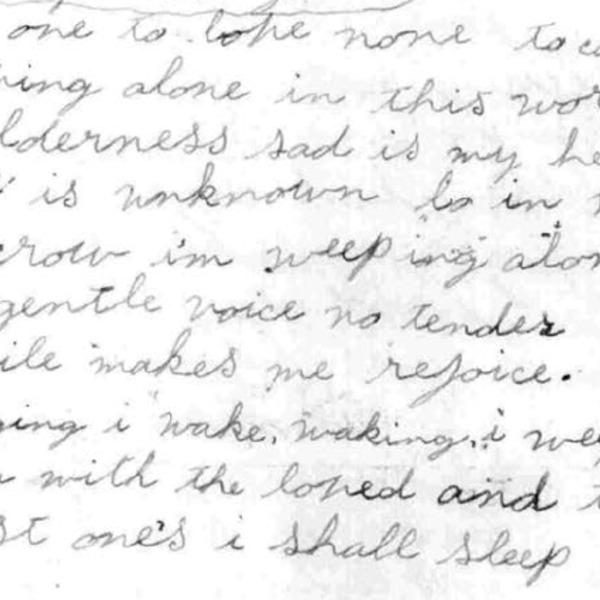 This exhibit contains letters found in Evelyn's institutional records.  Evelyn was a resident of the Huronia Regional Centre between 1926 and 1937.

Family separation was a central part of the process and violence of institutionalization, but these letters show that some families tried to remain connected to their institutionalized relatives, even in the face of impenetrable institutional control.

There was an ongoing battle to get Evelyn back home. Her parents, step-parents, and brother wrote extensively to the Huronia Superintendent advocating for her release (though her parents disagreed over whose home she belonged in). The Superintendent denied every request for Evelyn's release.  Instead, she was eventually released to Lorimer Lodge, a "halfway house" where she was put to work. Two reasons offered by the Superintendent for denying Evelyn's release included bad home conditions and what records describe as an "abnormal interest in boys."

The letters from family members found in Evelyn's records show that many people had attempted to maintain their relationship with Evelyn during her incarceration at Huronia.  Institutional authorities created and maintained Evelyn's isolation from her family.

"To my Dear Beloved Sister"

Many of the letters sent to residents are significant because they challenge an institutional and cultural assumption made about disabled persons: that they are unloved and unlovable. The letters written by Evelyn's brother are a testament to the fact that she was loved, and that family fought for her even as the realities of institutionalization threatened family bonds.

In the two letters below, Evelyn's brother expresses his wish that she be released from the institution and that he get to see her.  He also conveys his love for Evelyn. He had sent Evelyn numerous letters with no return. There is no way of knowing whether Evelyn ever did receive her brother's letters. 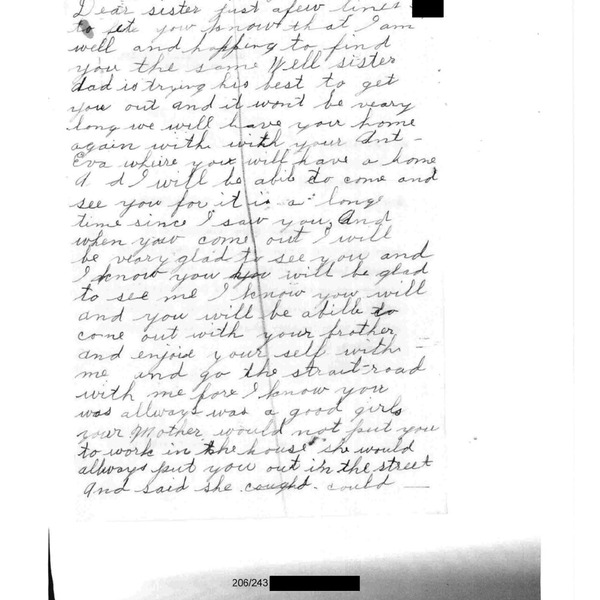 Letter to Evelyn from her brother August 1929

Excerpts: Dear sister, just a few lines to let you know that I am well and hoping to find you the same. Well sister, dad is trying his best to get you out and it won't be very long we will have you home again.

And I will be able to come and see you. It is a long time since I saw you. And when you come out I will be very glad to see you and I know you will be glad to see me. 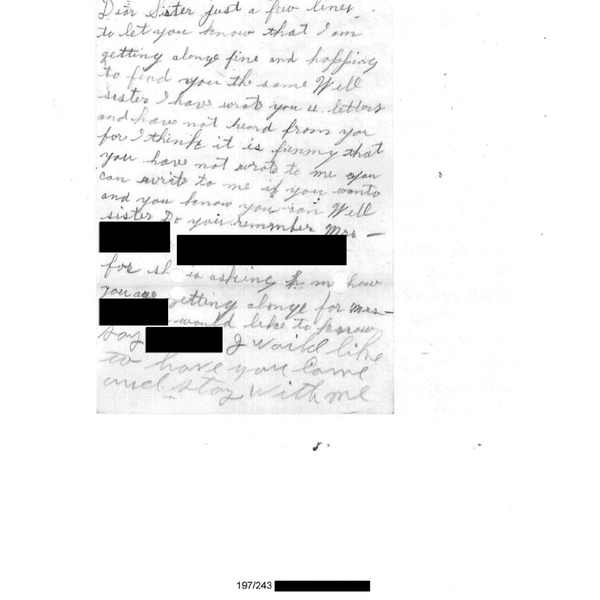 Excerpts: Dear sister, just a few lines to let you know that I am getting along fine and hoping to find you the same. Well sister, I have sent you letters and have not heard from you. I think it is funny that you have no wrote to me. You can write to me if you want to.

I will like to have you come and stay with me. 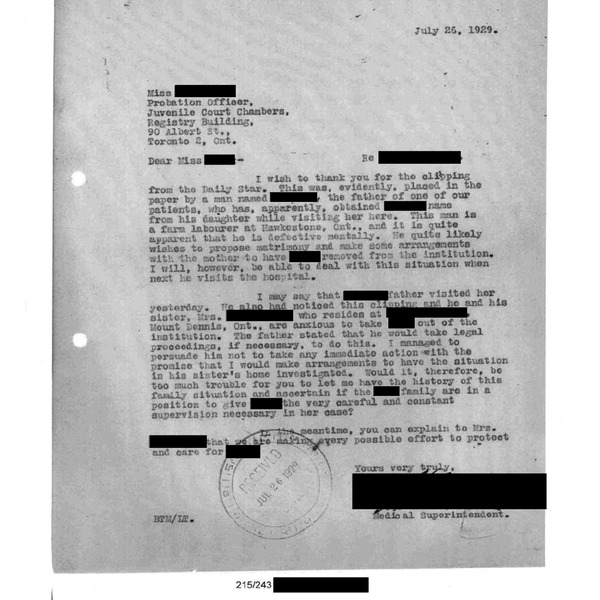 On July 24, 1929, an advertisement was published in the personal section of the Daily Star.  It read: "Will Mrs. [C] with daughter in Orillia named [Evelyn], kindly write Mr. [P], [...] [Evelyn] is in Ontario Hospital." The advert was written by a man who had become interested in Evelyn after visiting his own institutionalized daughter at Huronia. Evelyn's mother, upset upon seeing the solicitation in the paper, contacted Evelyn's probation officer.

It was the opinion of the Huronia Superintendent that Mr. P. had wanted to propose matrimony and have Evelyn discharged from the institution. Evelyn's father also appeared to be concerned. He visited the institution a day after the personal ad was published. He requested that Evelyn be released to him and his wife, threatening to "make legal arrangements if necessary."

The records show that the newspaper clipping was not the first time that Mr. P. had attempted to contact Evelyn. In fact, he had written her two letters prior to publishing the advertisement. Both letters appear to have been smuggled into Huronia during visits with his daughter. The second letter was found by a staff member, hidden in the bed of Mr. P.'s daughter. In these letters, Mr. P. confesses his love for Evelyn and his desire for companionship. He includes a poem.

Transcribed:
no one to love none to caress
roving alone in this world's wilderness
sad is my heart, joy is unknown
lie in my sorrow I'm weeping alone
no gentle voice
no tender smile makes me rejoice
Singing I wake, waking I weep
Soon with the loved and the lost one's I shall keep

A Collection of Letters to Evelyn